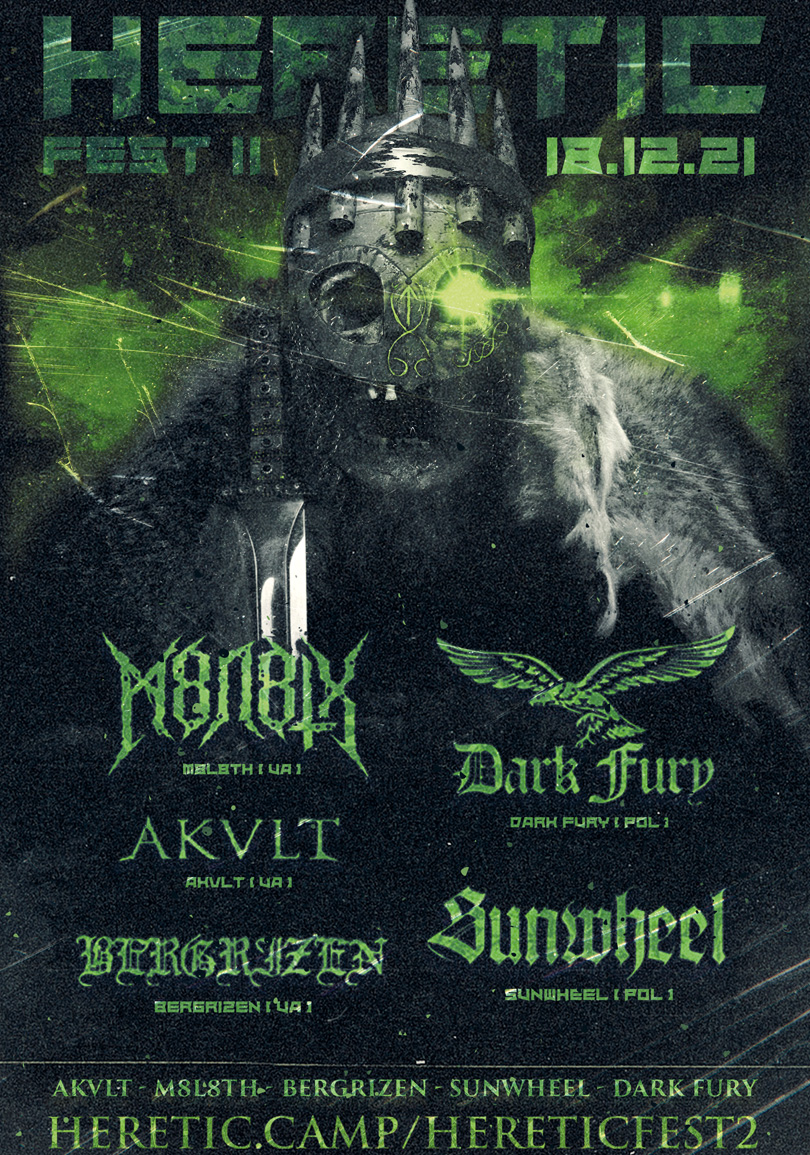 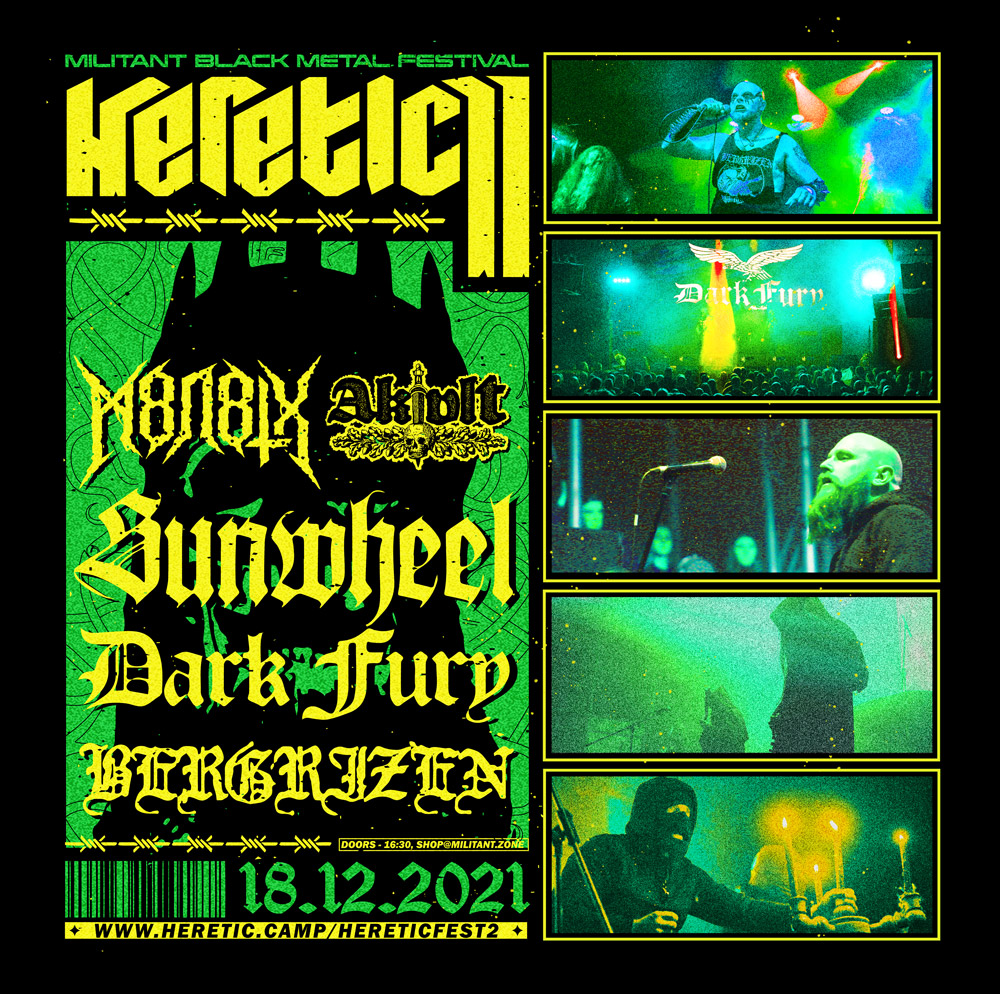 Militant Zone as a label and event organizer has been very active in the last years. Iconic Asgardsrei Festival, first started in Moscow, and organized since 2012 is a name of its own and the bands being released on the label are in the avant-garde of ideological black metal underground.

Heretic Fest is another initiative organized in Kiev. As its sister event, Asgardsrei, is a black metal festival, albeit on a smaller scale. However just like the ones on the bigger festival, the artists invited to perform are in the avantgarde of the radical scene.
The venue, decorated with national and battle flags as well as the various propaganda, was filled in with around 400 of supporters from many European countries, who came to join the bands in the celebration of Yuletide.

This year the Ukrainian bands were joined by guests from the neighbouring Poland, making the event a Slavic assault of fury and a showing of unity of the underground. The first band that appeared on the scene was the Ukrainian Bergrizen, playing straightforward music inspired by the bands from 90s Scandinavia.
At the festival’s opening, the harsh riffs punctuated with the furious blasts from the drummer brough the images of desolate peaks of Carpathians, while the fast melodies resounded in the hall with the icy atmosphere. Bergrizen is the youngest band of all that appeared on the stage, but it definitely is an act that is worth following on the eastern European scene.

The second band to appear on the stage were the old tyrants of the polish black metal – Dark Fury. The trio pumped a highly energetic set comprising of all the classics from their wide discography. Harsh vocals and merciless riffs with the drumming of Diathyrron from the legendary Fullmoon are a staple of this respected act.
The old classics from “Slavonic Thunder” were performed alongside new ones, from the “Flooded Lands” and “This Story Happened Before”. Every song was applauded by the public. The energetic melodies with a lot of tremolo picking in the fast parts were mixed with the slower parts, in which the notes were denoting an ominous atmosphere. Dark Fury blended a unique balance between a polish black metal sound, and pure vicious aggression that swept the venue.

The appearance of the militant commando of M8L8TH marked the start for the crowd to go into frenzy. Salutes went up and the mosh pit was ignited to stay till the end of the performance when the Russian/Ukrainian division entered the scene to begin their audial assault. Two vocalists , each one with a distinct style and the angry, yet melodic guitar and bass work exclaimed the start of the attack.

M8L8TH is a band that always shines the brightest in the live performances, and the poetry behind the lyrics mix very well with a strong scene presence of Alexey. Like a firebrand of old, time and time again he was able to raise the crowd of supporters to even higher levels of frenzy. The entire hall was joined in a big mosh pit. Every M8L8TH gig shows that there are few peers that can match the energy and the stage presence of this band.

Another band in the event roster was announced by the sombre tones of the orchestral piece, that was quickly surpassed by the fury of intricate black / death metal harmonies. Polish Sunwheel, a band started back in the 90s , this time supported by a guest vocalist, Baal of Peste Noire fame, occupied the stage. The polish horde performed their mix of esoteric and occult songs from the newest material released by Militant Zone “Iron Age of Strife” as well as some of the older classics from their releases.
The symphonic and monumental sound filled the club with a cover of eldritch darkness, as the tempo of the black metal storm was not subdued, but instead was kept high until the end of the entire performance. The fast technical riffing was merciless as the band delivered one opus after the other. A flawless performance that once again stirred the crowd of supporters into a fierce moshing pit. During the last song “Taniec Run” Alexey of M8L8TH joined the band on stage, to deliver a powerful vocal performance.

The last ceremony of the Yule night was A-Kvlt, infamous black metal ritual, dedicated to the secrets of esoteric Aryanism. The scene was bathed in a blood-red light and a thick smoke was raised towards the sky, as the iron crown was wielded by the vocalist, while the musicians delivered one aggressive piece after another.

Clean vocals mixed with the raspy screams, punctuated by precise drumming announced a birth of a new man, unburdened by the degeneracy of the modern world. The fast, unrelenting music of A-Kvlt was met with an evenly matched fury of the supporter crowd, many throats singing the words of the hymns alongside the band.
Just like the sword, wielded by the vocalist cuts the weakness, so do the ideas presented by A-Kvlt and other bands performing on that night separate them from the mainstream, spineless ‘black metal’. Events such as this, are a shining beacon of authenticity and a proof that the true black metal scene is very much alive.